I spent some time this weekend cleaning our office – we removed this big storage cabinet which had housed a bunch of junk. At first it had been a pretty functional space, but over time we just filled it full of stuff that had no place. Now that place is in a landfill somewhere. Guh. Anyway, as I was cleaning out stuff I found some old junk that I had been keeping around for no reason, including a bunch of portfolio stuff from when I was a student, and early fliers I made for bands, and, maybe most interesting (to me) of all- the very first flier I ever made. pics:

I spent about a year as a “digital re-touch artist” at Harman’s Camera shop. It was an interesting job at times- I got to learn things about Photoshop that I would not have otherwise learned, and this was in 1998 or 1999, so I was probably using Photoshop 5? The clone stamp was a real friend to me. The first image here is an example of a pretty typical job: take a faded, discolored and mangled photo and restore it to a nice looking black and white image. This must have been the hardest one I did because it’s the only sample I kept for my portfolio. 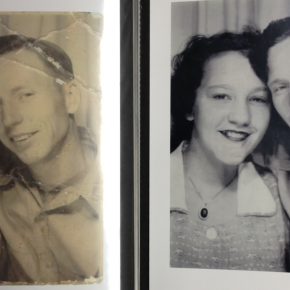 Next up is a more unusual sample, the family of this guy wanted a picture of him alone for his funeral, but I guess he had been a real nice guy and popular among friends and family, so they couldn’t find a picture of him on his own. Enter Ben Swift, digital re-touch artist of lore!, who deftly removes the guy on the left and a pretty sweet bicycle. No one was the wiser, but I wonder if the guy on the left was at the funeral and wondered about this. This is dangerous work people! 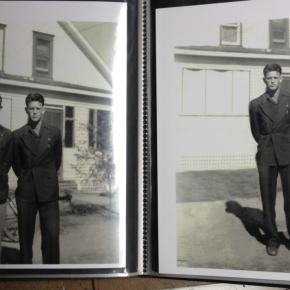 Ok- next up is one of the only good things I designed in school. The actual layout of this page is just OK and pretty copy-heavy, but the invention itself is brilliant. It’s called Sperm Lock™ and it is a form of contraception that installs on the man’s vas defrens. When engaged, the Sperm Lock™ clamps the tube shut, and the man cannot emit sperm. When he wants to put a baby in that ass, he can simply turn the Sperm Lock™ off, and ejaculate normally. This is HIGH TECH stuff people, and it is operated…. with a standard mini garage door opener. As you can tell from the highly informative medical illustration, this thing is fool-proof. I should actually take it to market. 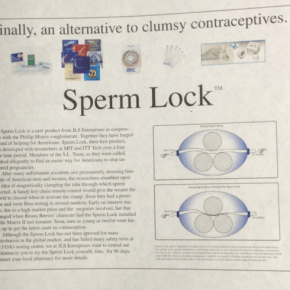 Next up is some fliers and the CD layout I did for my band Sorbate 80. We were an amazing, ahead of our times sort of alt-rock band that would have been popular about 4 years after we broke up. We were ahead of the curve. Being so, we had no fans and played terrible shows on bad nights at dumb venues. The flier on the left, is one of my favorite all-time fliers. I grabbed a “van for sale” sign off the wall at the grocery store and made this flier as a hommage/satire. Putting the van on the side of the van might be my greatest accomplishment as a designer. This flier also seems to say that we had a good show lined up -that we were booked at Ranch Bowl (a popular and respected venue) with the Verve Pipe (known for their hit song “Freshman”)! Granted- this was a full year before that song became a hit, and on a Monday night: it was still a shit show. The flier on the right was kind of a typical thing, make a collage and put some words on it. The CD layout was maybe one of the best things I created and printed at school. I was real happy with how it turned out. I think we made 5 copies. 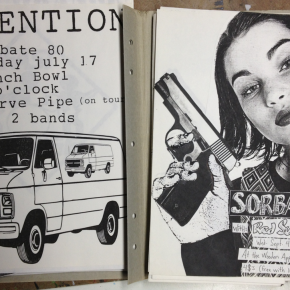 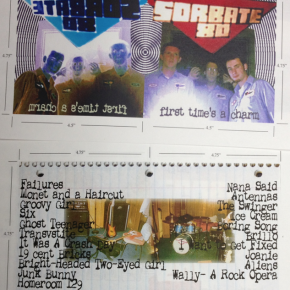 And finally, the reason you came here, the greatest thing since sliced toast, the original first flier I ever made, using both a computer and photocopier and Sharpies, in 1994: 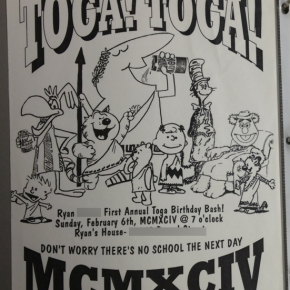 Just look at all those licensed cartoon characters and food mascots standing around in ill-fitting togas and slamming Mt Dew. And not a lady in sight! This is my past present and future I’m afraid. Welcome to flavor country.