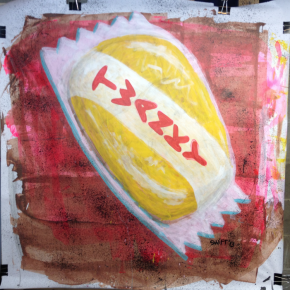 The genesis of this painting was a sketch I drew in my appropriately named “sketch book”. I drew the sketch one day before the “Hostess is going bankrupt and you will never see another Twinkie!” news-cycle started up. Remember that panic? Well anyway, sometimes I think I’m a seer or something. Othertimes I don’t. All I can say is that I’m not sure why I drew the Twanky drawing, but ut was auspicious.

ON TO OTHER THINGS>

I work as a designer, mainly for internet related things like websites and digital ads and email layouts and … other stuff on the web. But I get to have a nice little change of pace as an animator for this product that makes plants grow better. So I’ve been practicing a bit with animation in After Effects – here’s a super early animation test for a plant growth:
[jwplayer mediaid=”2237″]

One of my goals for this year is to do webcomics, but I’m not sure what that means really, so I’ve been reading other stuff, and just kind of absorbing the concept. I mean, I’m no stranger to the comic… I just need to figure out what I want to do with the genre. Some of it will be one liners, some of it will be story based, some of it will be ?? whatever. I’ve decided to have several different titles, all housed under my MtMakeMore.com URL for it. It will house the various “comics” and they will intertwine. I’m working on how to design the thing, but like everything, it will probably change over time. So. More news as it happens.