Welcome to 2013 friends! We made it. No apocalypse. Now. SO… since we made it to the other side of 2012, let’s start to talkin’ about the futurez again. BUT FIRST: here are the final two big word paintings that I made in 2012; literally finishing them both on New Years Eve! 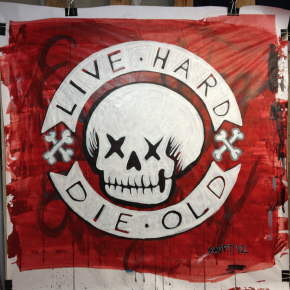 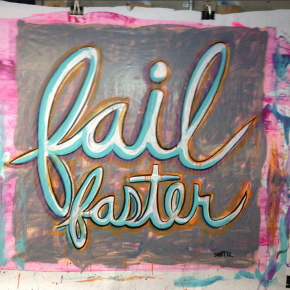 So now that we have that out of the way… uh. I plan to paint more and print more and make more stuff this year. Just like every year. I like that. I will also breathe more ride my bike more and eat more and sleep more and all of that stuff. I like the fact that I am in a place in my life where making art is pretty much just “gonna happen”. But – with that said – I am setting myself up for a couple of personal challenges that I have not undertaken before.

I have no real interest in sharing more about myself or my home life than that. I am really a pretty introverted and private person in the real life that I think that I think I am in real life. I wish I was a cartoonist like KC GREEN or James Kochalka or XKCD or Drew or the girl who does those great cartoons about history that I can’t remember the name of… or really anyone who does that stuff, wait. SHIT>