I’m so happy to post the newest Killigans video that I just finished creating:

we shot this back in May of this year, when I say we I mean the team was Aaron Jarzynka and Zach Bock on cameras, the Killigans, friends and family, and a bunch of fans who came out and spent nearly 10 hours hanging out and having fun on a nice summer day. Then I brought the footage home and had a kind of difficult time bringing it to fruition. I basically had to upgrade my RAM, I ended up getting a new hard-drive, then I got a new operating system, and I also upgraded my Adobe Creative Suite to CC – all in the past couple of months in order to make my machine work well enough to be a good video editing station. I’m not saying it’s not a big deal, but it’s not.

I spent much of that time specifically not working on the video because I had made the mistake of thinking that “multi-camera editing” in Premiere Pro was going to speed the process, but what I found was that in non-linear editing, with 30+ camera tracks, and lots of quick edits, multi-cam was just a giant pain in the ass. So working on the video was frustrating and not fun at all. Eventually I broke down and started from scratch, almost. I decided to use the multi-cam edit from my first attempt as the “base” layer of video, one that was synced to the music and basically timed out pretty well, and layer selected clips on top of it. In the end I was just scrolling through footage and selecting cool shots and dumping them into the video timeline. I watched the whole thing a few more times, made some more little edits, and decided it was done.

Next I through it into After Effects and did some color effects, added the film and light leak overlys, titles, and rendered it out.

Now, with that monkey off my back, I’m ready for the next one, equipped with the technology and mindset to get it done better, faster, and better. Faster too.

What else is new? I guess I’m going to revamp some websites. Eyeskull is due any day now. Killigans need a refresh. BicycLincoln looks a little dusty.

I’m also working through a basement studio remodel which will hopefully take place this weekend and involve the building of a wooden wall on which to work. And some painting. the current condition is: destroyed: 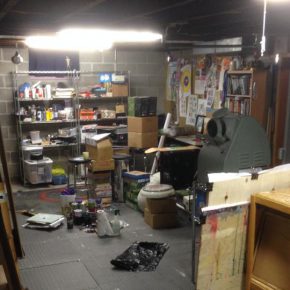 the wall to the left will soon be a flat white workspace on which to create art or display things. instead of a boring dreary uninspiring grey concrete brick unusable wall. yeeehaw! I’m excited. I’ll post a pic when there’s something new to show.