I have had a (at least one) website since 1997. I have been on different types of servers, different hosts, different domain name companies, different publishing platforms, and different website technologies. I’ve also had varying degrees of experience, time, and ability to put into a website. Sometimes I lack focus and don’t update for months. Right now, I’m aware of my site, and keenly aware of how it’s not working for me. It’s not working against me really, but it’s not working for me. I don’t find it to be useful, in creating a conversation, in being interesting, in being something that I can post to without a  certain amount of trepidation. So, I’ve decided to begin to revamp it (and my process) in order to start something new, rather than remain stale. 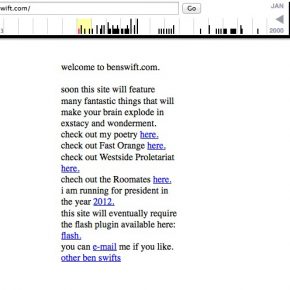 Part of the change-process is taking inventory of what I actually have going on here, and what I want. I use a popular content publishing system called WordPress to create posts and make my site have a look and feel (a template), and be consistent in how to sort and find information. The problem is that I’ve been adding on to and taking away from this since sometime in 2007. I’ve changed the template a couple of times, updated the software, added and subtracted different plugins and add-ons to display my portfolio, and used some of the built-in functionality of WordPress to create portfolios, stores, galleries, and other “custom” ways to organize my junk. I have a ton of stuff on here… but a lot of it doesn’t work, has bad links, or needs some real help. In a lot of ways, this site is worse than a blank slate because it’s got so many problems.

I’ve Frankenstiened this thing to the point where it may be better to start fresh than to try to mend the messed up parts. It would be nice if this was a physical object, with little folders of pictures I could lay out on my table and sort and label and put into some kind book. But it is the web, and while the tools are good and useful, you still have to work within the inherent advantages and limitations of the technology. There is a prevailing thought that the internet can do anything, and in some ways it can, but it’s also got structure and sometimes structures break down. And- just because it can do anything doesn’t mean it can do anything fast, and that making anything happen isn’t tedious.

My eyeskull.com site got bombed (hacked? disappeared?) earlier this year, and I’ve yet to rebuild it. Partly because it was erased with no remains, and partly because this feeling of “what do I do/how can I make this thing future-proof?” is deeply ingrained in my decision making process.

Should I remain a domain name off on my own? Should I be on tumblr instead? Should I just be tweeting? Wouldn’t it be better to have the portfolio on Dribble or Behance? Is a landing page site pointing to other services enough? I don’t know. I do know that whatever I’m doing now isn’t working that well for me and doesn’t seem to be sustainable. So. Change is in the air.

(Originally written in 2013, but never published, this post is about the kind of angst a long-running site can impose on a site’s creator. Most of the issues are unresolved.)

PreviousPrevious post: Gravity’s Rainbow – The Most Amazing Sentence Ever Written About Toothpaste
NextNext post:we’re all fucked