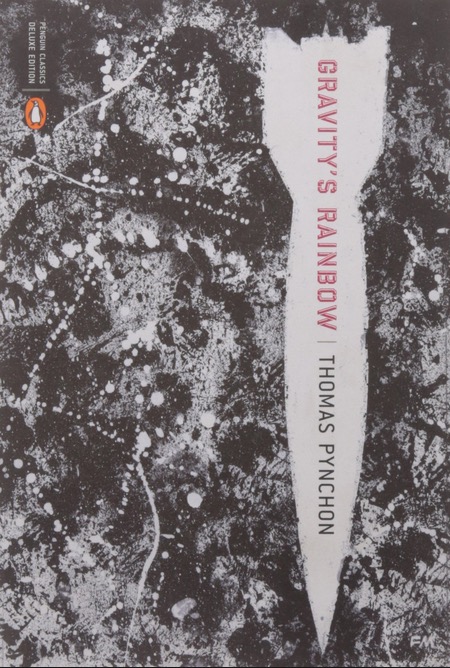 I have to thank my friend Jeremy (https://escapepodtank.com/) for the gift he gave me for my birthday last year, the book “Gravity’s Rainbow” by author Thomas Pynchon. It is without a doubt, the hardest read I have encountered. At least in recent memory.

I knew nothing of the book before starting it back in September, and still know little about it. I had previously read the Pynchon book “The Crying of Lot 49” years and years ago. I don’t really remember anything about it except that it was about the postal service, and perhaps a secret postal service? There was a horn symbol involved.

Anyway, back to Gravity’s Rainbow. I started the book back in September, like I said, and I’m only to page 137. Part of this is due to the fact that I had previously begun the habit of reading before bed (actually getting into bed and reading with a side lamp in an effort to unplug from digital media), and partly due to the particularly thick and confusing prose. There are a slew of characters, locations, concepts, and vocabulary words (some of which I suspect are made up) that add to my nightly work. This is not a bed-time read. I am frequently reading and re-reading pages and sections to figure out who is doing what and what is going on. I read the first 30 or so pages at least twice before figuring out that much of it is a dream sequence (at least I think it is?).

Gravity’s Rainbow is set in Europe (I think England) during World War II and has base in a psychic / mystical intelligence unit called the “White Visitation.” This “White Visitation” is interested in where German missiles are going to fall, have fallen, and whether or not people can somehow psychically predict future locations, and possibly if sound echoes backwards in time. There is some pretty weird (or possibly normal) sex stuff going on too.

Anyway. I’d like to present a sample sentence to demonstrate the elaborate writing style. To set this up, as I understand it, a woman and her boyfriend were driving home when they saw people entering a church to go to an Advent ceremony (it’s winter) and they have parked their car and gone in, where there is a men’s choir singing. I think this is the woman’s mind wandering, but I’m not sure:

In the pipefitters’ sheds, icicled, rattling when the gales are in the Straits, here’s thousands of used toothpaste tubes, heaped often to the ceilings, thousands of somber man-made mornings made tolerable, transformed to mint fumes and bleak song that left white spots across the quicksilver mirrors from Harrow to Gravesend, thousands of children who pestled foam up out of soft mortars of mouths, who lost easily a thousand times as many words among the chalky bubbles–bed-going complaints, timid announcements of love, news of fat or translucent, fuzzy or gentle beings from the country under the counterpane–uncounted soapy-liquorice moments spat and flushed down to sewers and the slow-scumming gray estuary, the morning mouths growing idle with the day tobacco and fish-furred, dry with fear, foul with idleness, flooded at thoughts of impossible meals, settling instead for the week’s offal in gland pies, Household Milk, broken biscuits at half the usual points, and isn’t menthol a marvelous invention to take just enough of it away each morning, down to become dusty oversize bubbles tessellating tough and stagnant among the tar shorelines, the intricate draftsmanship of outlets feeding, multiplying out to sea, as one by one these old toothpaste tubes are emptied and returned to the War, heaps of dimly fragrant metal, phantoms of peppermint in the winter shacks, each tube wrinkled or embossed by the unconscious hands of London, written over in interference-patterns, hand against hand, waiting now–it is true return–to be melted for solder, for plate, alloyed for castings, bearings, gasketry, hidden smokeshriek linings the children of that other domestic incarnation will never see.

Is it lyrical? Yes. Is it painterly? Yes. Is it easy? No! It’s probably the most amazing sentence ever written about toothpaste!

This is just one example of the many extraordinary meanderings I have come across so far. I’m excited to find more.

My ability to read the book rating: C

*featured image – I made that illustration of the donut puking a rainbow in 2014, it has nothing to do with the book or toothpaste.