I bought an old book ($2 at Goodwill) called Heraldic Design, by Hubert Allcock, published by Tudor Publishing Company, 1962. I bought it because it was a nice looking, thoroughly illustrated book about a kind of design that is frequently used but something I didn’t really understand the history of, and of the symbolism. Anyway – I was surprised to see my surname on page 45, under the heading of “American Arms”. 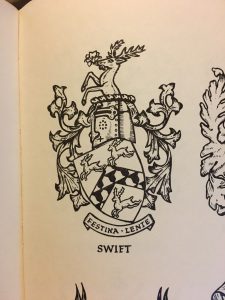 The shape of the shield is a “heater” which originated in the 1300’s. The main background color would have been silver, and the chevron made of a fur called “vair”, if the tilt of the shield means something, I haven’t found out what. The design features three “charges” of deer, rearing up or running to the right. I don’t know their color or meaning.

Evidently, the shield is called “family arms” and is different from the “crest” which is the adornment above the shield. The “arms” and “crest” are not the same thing, and only those who had served as knights could earn a crest, which was displayed resting on a helmet. To quote “A crest alone cannot be awarded to anyone unless he possesses arms – thus, without a shield no family can claim a crest.”

In this case, the helmet (or helm) seems to be a “heaume” (14th century) and is shown in profile, turned to the right (or “dexter”). The mantle (flowing cloth-like ornament) would have been white and silver, and the “torse” – the wreath holding the mantle to the helm, might have been white or silver as well. The “crest” is a deer, this time “rampant” and holding a flower in his mouth.

All of this is interesting and I am going to do more research into the specific details, but so far I have only looked up the motto “Festina Lente” which is by itself – fascinating.

According to Wikipedia – Festina Lente means “make haste slowly” and was a popular motto used by Emporers Augustus and Titus, the Medici family and the Onslows. It basically means “take time to do it right”.

The constructive intent of the phrase is that activities should be performed with a proper balance of urgency and diligence. If tasks are overly rushed, mistakes are made and good long-term results are not achieved.

Slowly make haste, and without losing courage;
Twenty times redo your work;
Polish and re-polish endlessly,
And sometimes add, but often take away

-which is great advice for any creative person. I love it.

The meaning of this motto with the name Swift is not clear to me, but it has definitely piqued my curiosity, and I will look into it all in further detail. All this info for $2 and a trip to Wiki, not bad.

A beast courant (also at speed or in full chase) is running, depicted at full stride with all four legs in the air,