“Every now and then you come across a song that you feel may change your life, or maybe the world.”

I wrote that sentence in a post on February 7th of this year (link to post) about $2 Dollar Hotdog $1 Water – a song that I had grown fond of due to the amazing and addictive video:

Little did I know that 3 months later, a series of events would take place that would indeed change my life. Or maybe the world. Well, at least my life and at least a little bit! Here’s what happened.

I had announced that I’d be leaving my job, and some of my coworkers were thinking up a good surprise “going away” present for me. Based on my love of $2 Hotdog, Zach emailed the address on the YouTube page and said something about me being a huge fan of the song, and how I was leaving my job, and wondering if they could buy me a autographed t-shirt or something. The Bishop Fredrick Barr wrote back and said – better than that, he would just fly out to Nebraska for a visit! A week later Fredrick surprised me at my going away party. Here are some selfies with everybody: 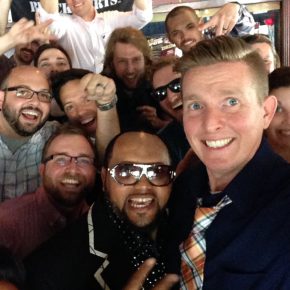 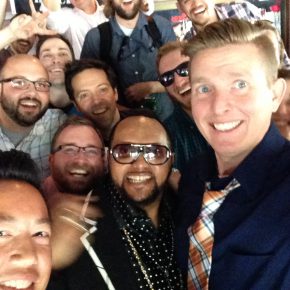 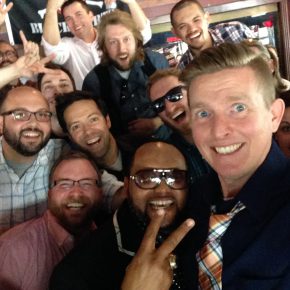 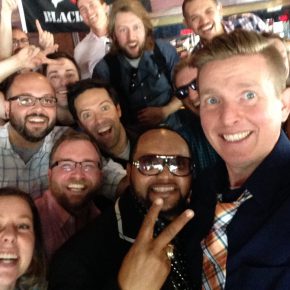 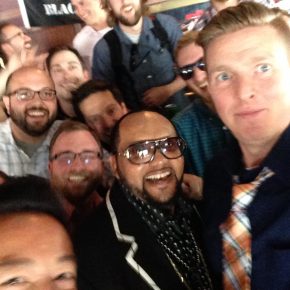 If I look bewildered – it’s because I am!

We were having what I thought was a normal “we’ll miss you” casual going-away get together at the agency bar of choice (12th Street Pub). A bunch of folks from my department went over early, then people from the other parts came too, it was a really nice group and we were just chatting and having a drink. Aaron and Quiller had me go over to one part of the bar where they had a laptop out I could tell they were going to do something, then I could tell they were starting up the video and it was on the house PA, and it was on the big screen, and then I turned around to see Frerick Barr standing there. It was nuts. I was astounded. I was surprised, to say the least. I don’t know what could have been more surprising and confusing than the man himself from the $2 Hot $1 Water video, which I had watched so many times, standing right there. I think I gave him a hug and then we just danced around and sang the song. It was so strange. 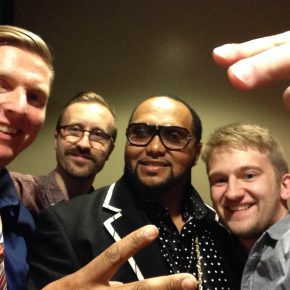 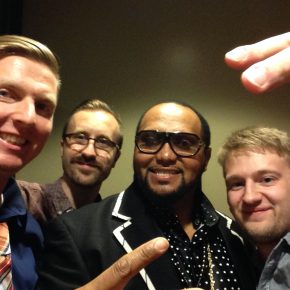 After that- we talked for a while, he talked to everyone and sold some tshirts, and eventually we went to Misty’s for dinner. It was really nice to hear his story, the whole backstory of the song and the video and him getting the email and deciding to come to Lincoln. It was all very amazing and funny and bizarre. I look forward to collaborating with Fredrick in the near future. I think we can make some stuff happen!

Fredrick is a really uplifting and inspiring person to talk to. He has a totally positive attitude about what’s going on. I really respect him and hope I can pay him back for the “gift” he has given me, not only in his personal visit, but in the song and video. All I can say is AWESOME – and I will continue to advocate for this awesome song!